Datxplore is a graphical and interactive software for the exploration and visualization of data. Data set under consideration are for population modeling as defined here. Datxplore provides various plots and graphics (box plots, histograms, survival curves…) to study the statistical properties of discrete and continuous data, and to analyze the behavior depending on covariates, individuals, etc. It can be used to

Notice that starting from the 2019 version, it is possible to export the Datxplore project to Monolix.

The graphical interface comprises three parts in addition to the menu. A HOME frame, a Data frame to manage your data set and a frame to explore the data set. 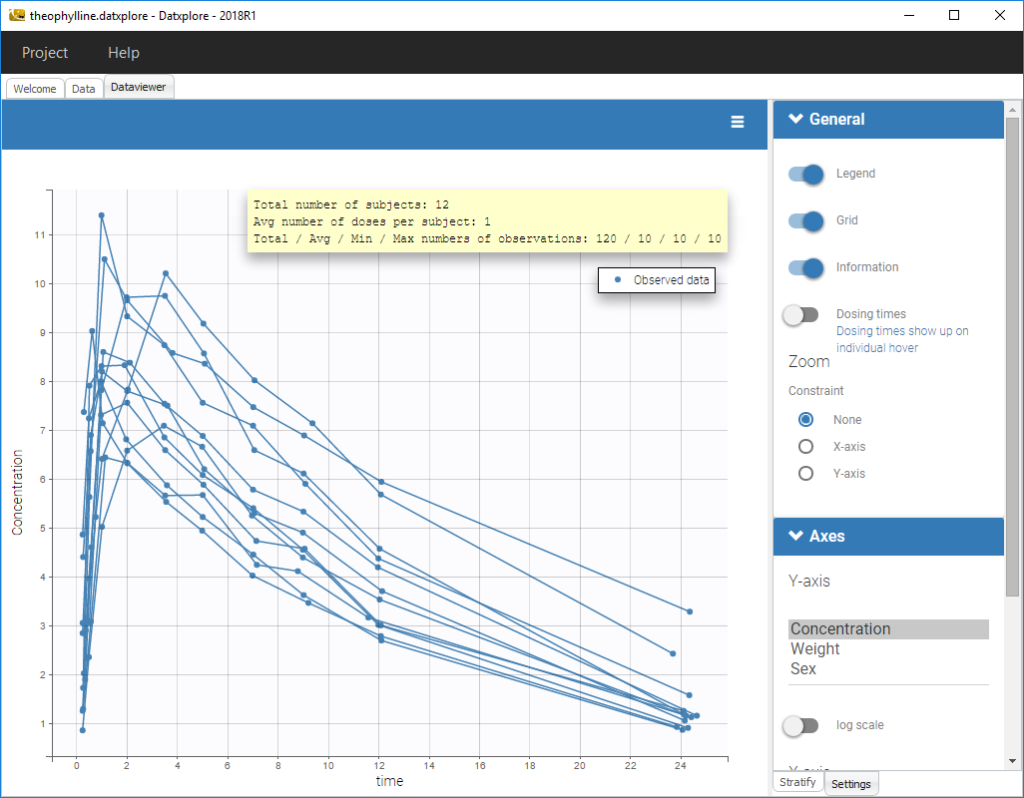 The considered datasets are dedicated to population modeling. The population approach describes phenomena observed in each of a set of individuals and the variability between individuals. The data is thus individual data, and is often longitudinal (over time).  For each subject, the dataset contains measurements, dose regimen, covariates etc … i.e. all collected information.
The first thing to do is to choose a data set and tag the columns to column-types as defined here.

In the Dataviewer frame, the user can see all the possible graphics. See Data visualization section.

The data set structure contains for each subject measurements, dose regimen, covariates etc … i.e. all collected information. The data must be in the long format, i.e each line corresponds to one individual and one time point. Different type of information (dose, observation, covariate, etc) are recorded in different columns, which must be tagged with a column type (see below). The column types are very similar and compatible with the structure used by the Nonmem software (the differences are listed here). This is specified when the user defines each column type in the data set as in the following picture. 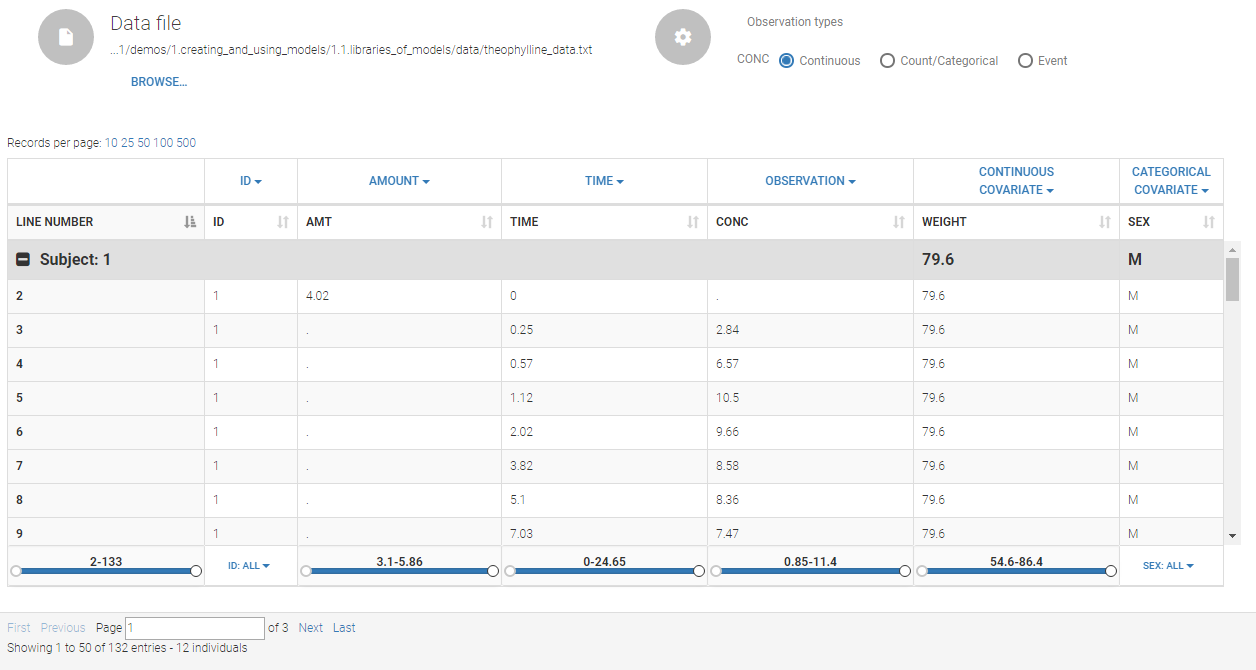 Notice that Monolix often provides an initial guess of the type of the column depending on the name.
In addition, we have a button DATA VIEWER that allows to explore the data set as Datxplore.

The first line of the data set must be a header line, defining the names of the columns. The columns names are completely free. In the MonolixSuite applications, when defining the data, the user will be asked to assign each column to a column-type (see here for an example of this step). The column type will indicate to the application how to interpret the information in that column. The available column types are given below:

Column-types used for all types of lines:

To load a new data set, you have to go to “Browse” your data set (green frame), tag all the columns (purple frame), define the observation types, and click on the blue button ACCEPT  as on the following. 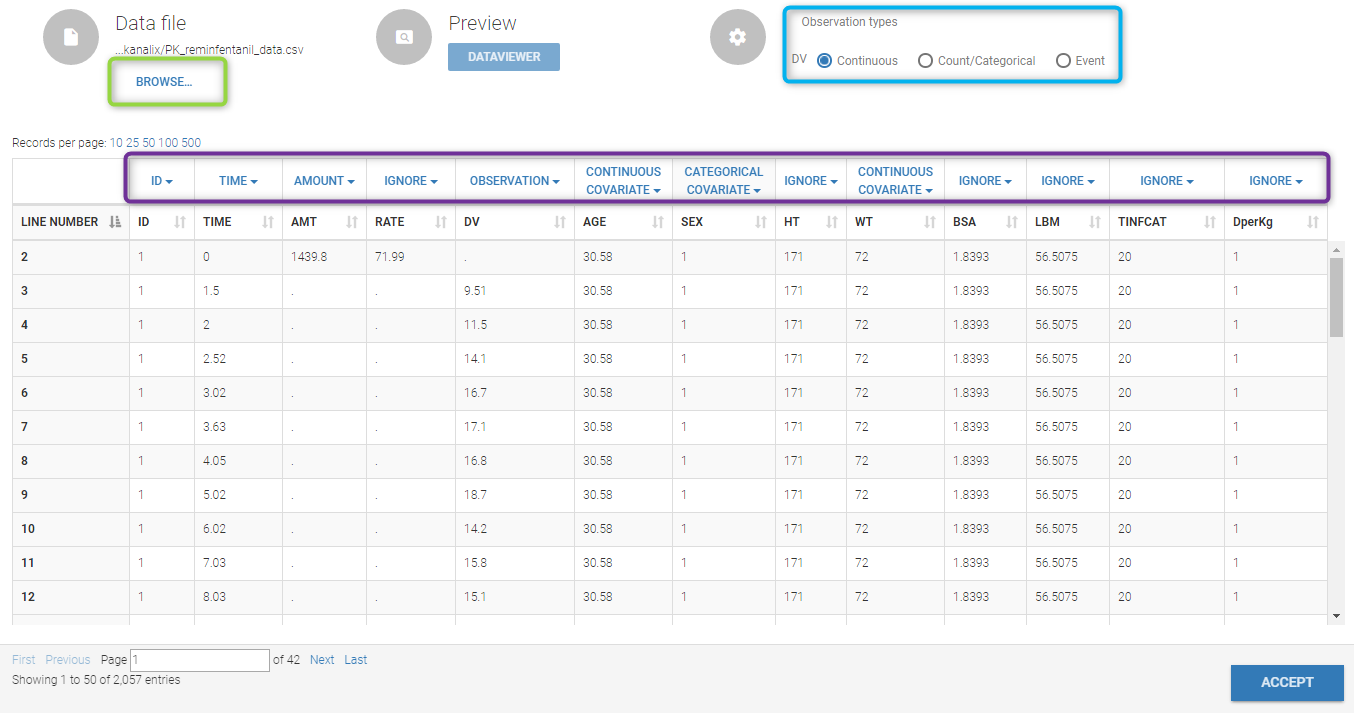 There are three types of observations

The type of observations can be specified by the user in the interface. 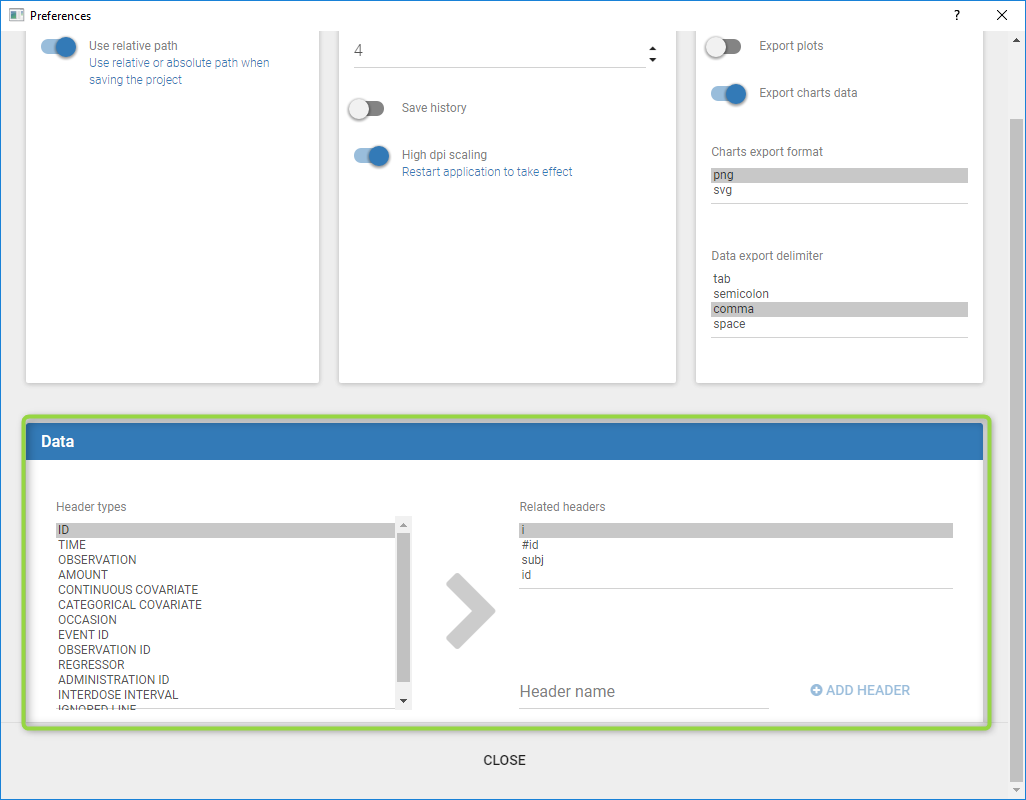 Starting from the 2020 version, we added the possibility to filter the data set as can be seen here.

Interacting with the plots

Within the frame Dataviewer, the right part of the interface holds a panel with several tabs to interact with the plots: 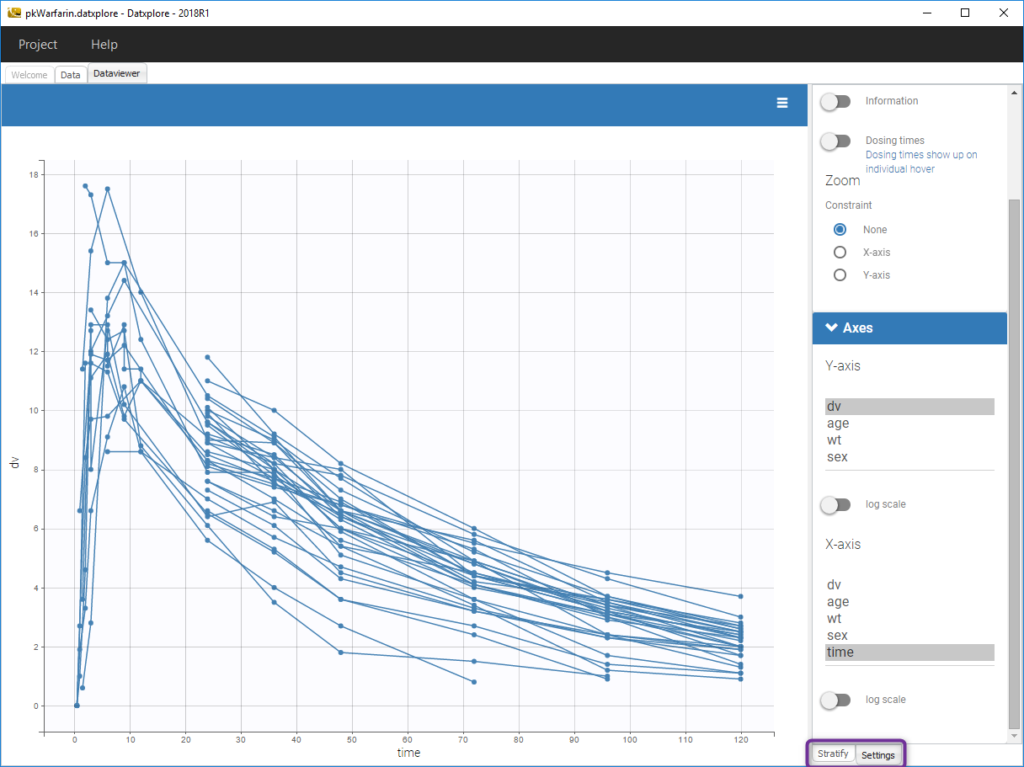 The following figure shows a plot of the observed data from the warfarin dataset, stratified by coloring individuals according to the continuous covariate wt: the observed data is divided into three groups, which were set to equal size with the button “rescale”. It is also possible to set groups of equal width, or to personalize dividing values.
In addition, starting from the 2019 version, the bounds of the continuous covariate groups can be changed manually. 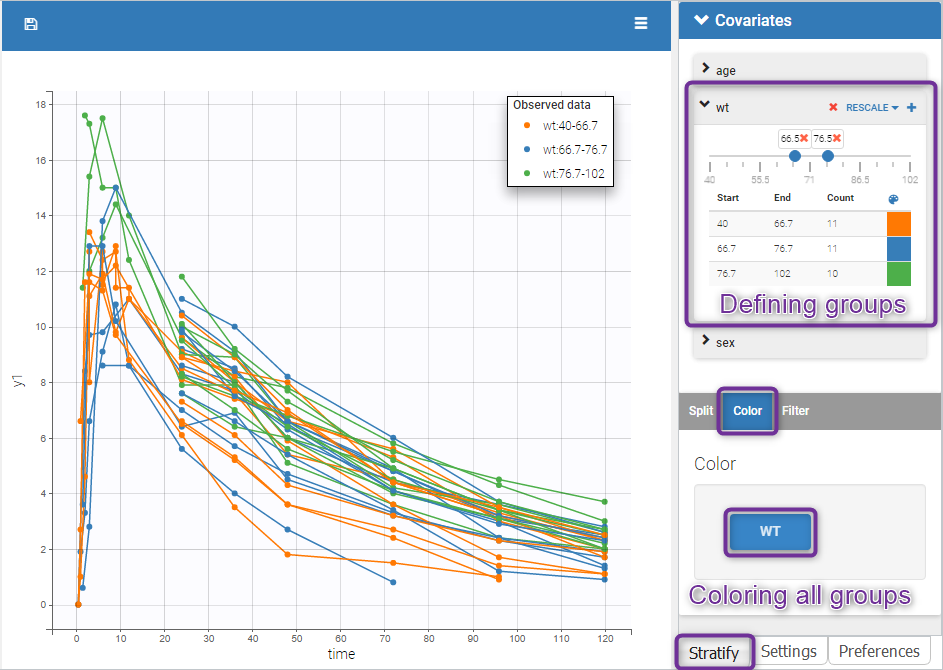 Moreover, clicking on a group highlights only the individuals belonging to this group, as can be seen below: 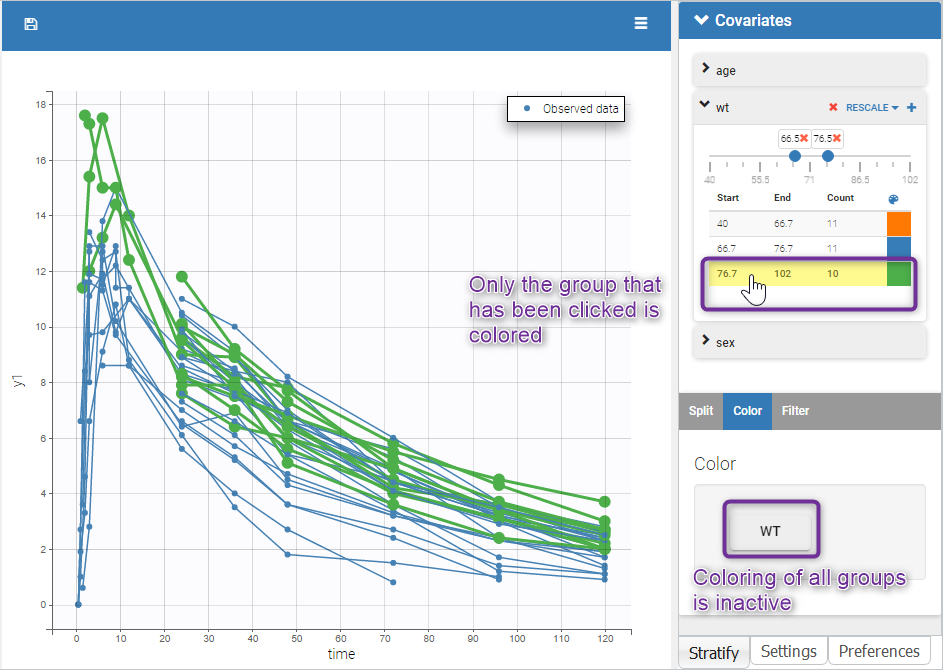 The layout can be modified with buttons on top of each plot to select the number of plots (green highlight below), to arrange the layout (purple highlight below) and to remove the settings frame (pink highlight). 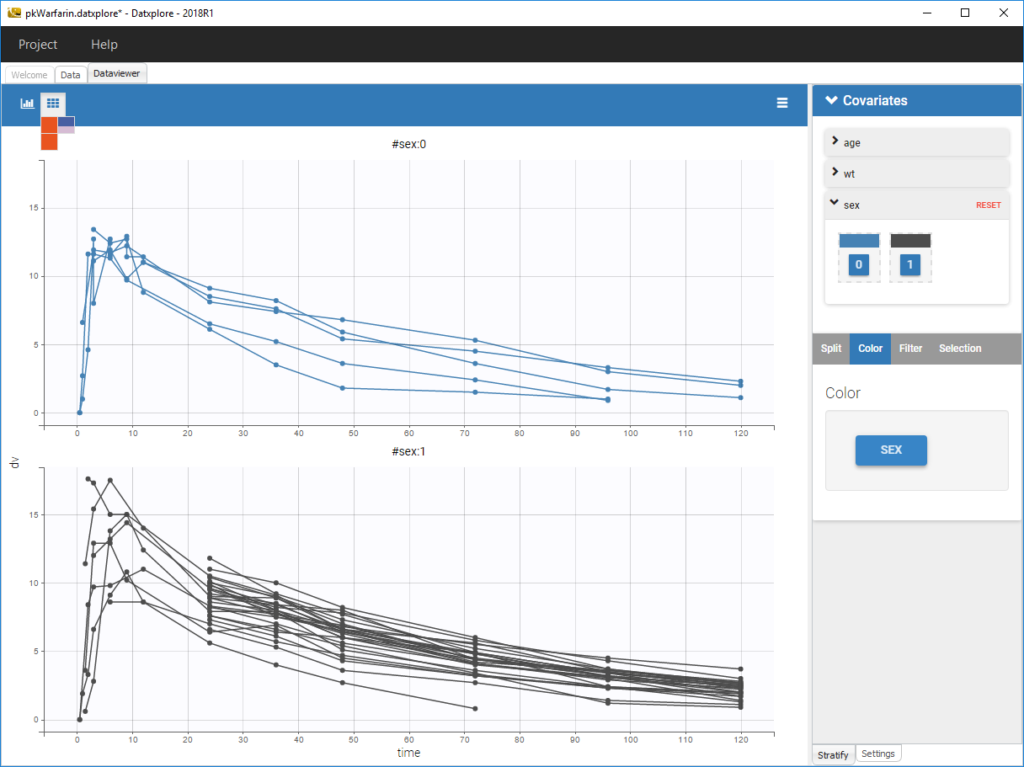 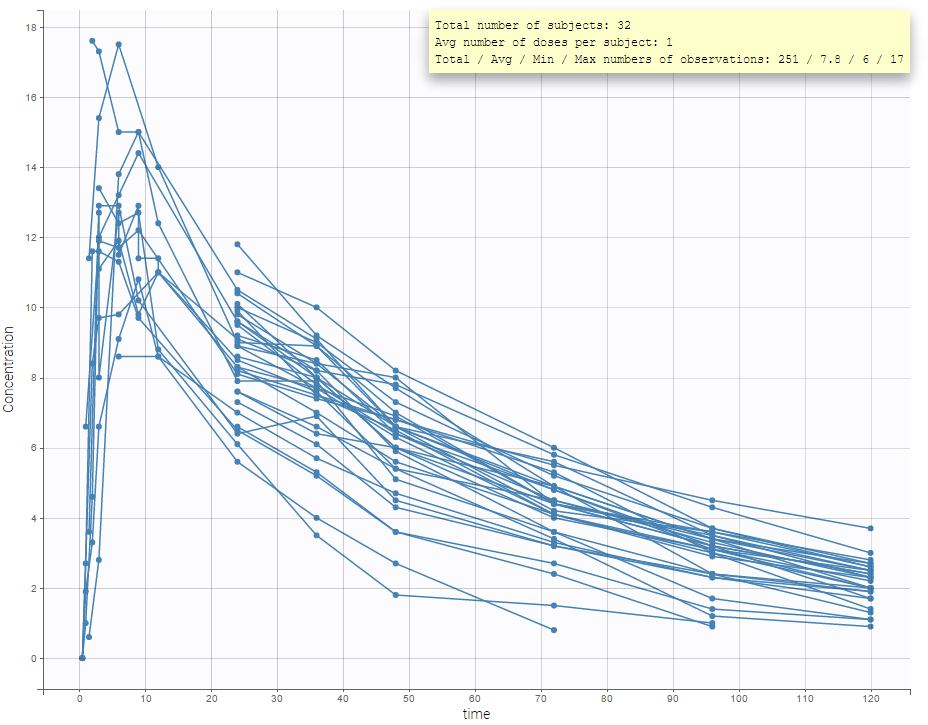 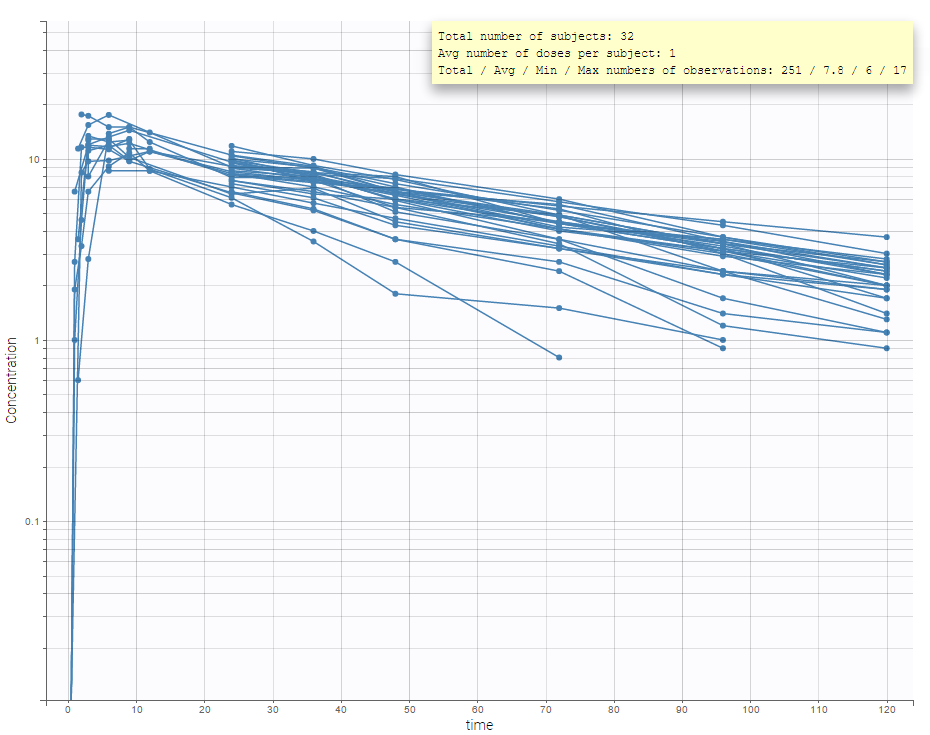 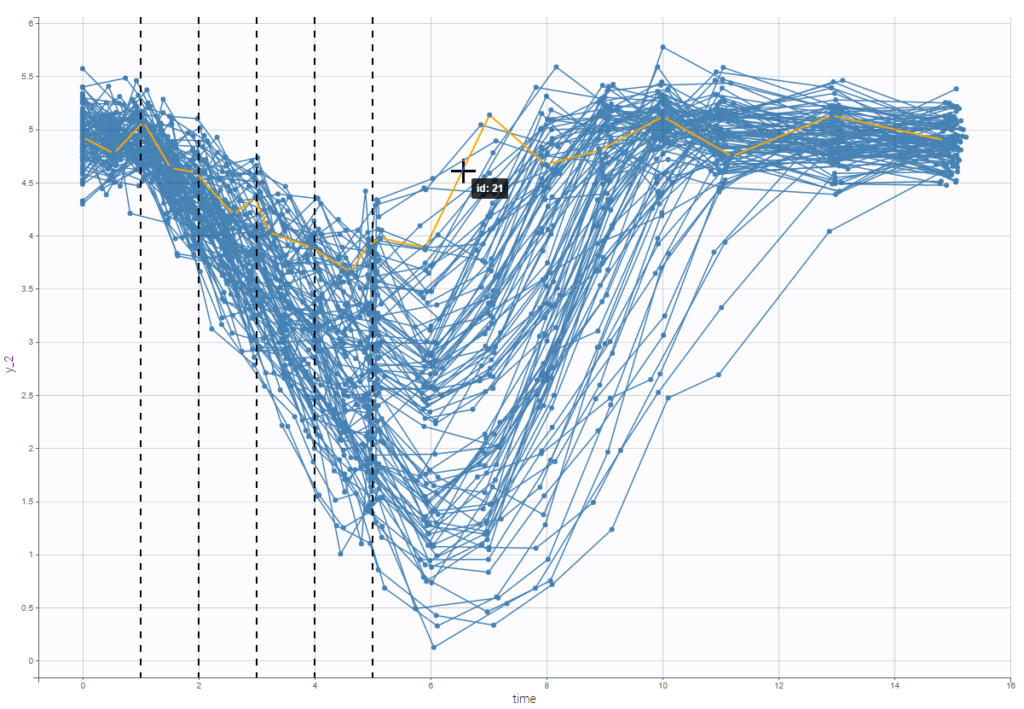 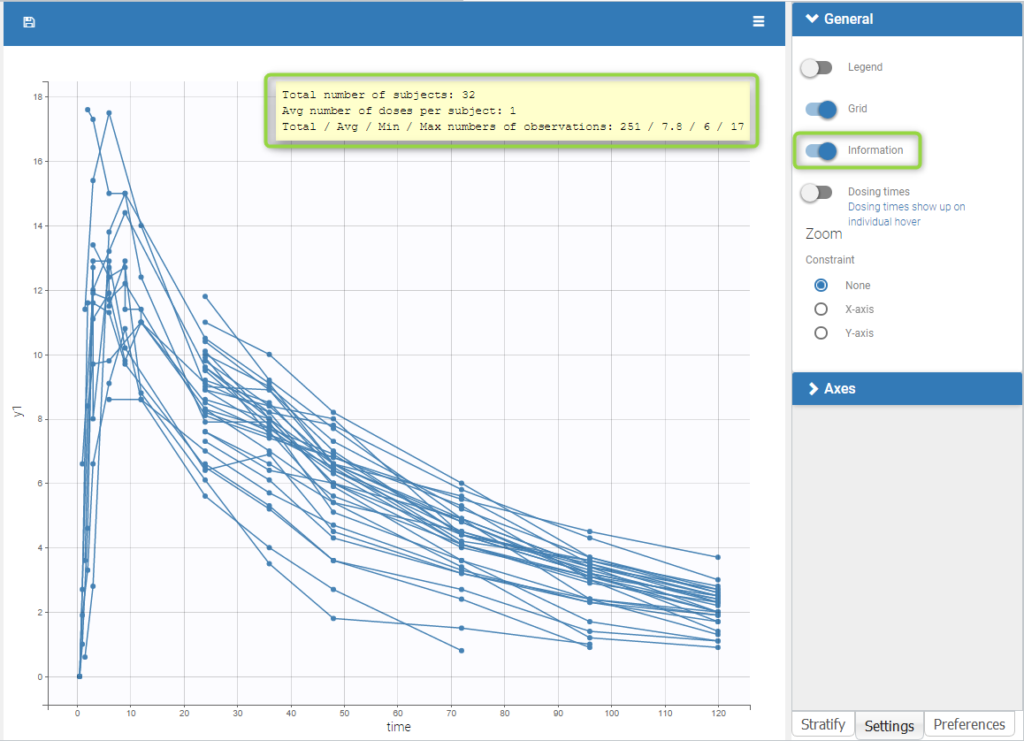 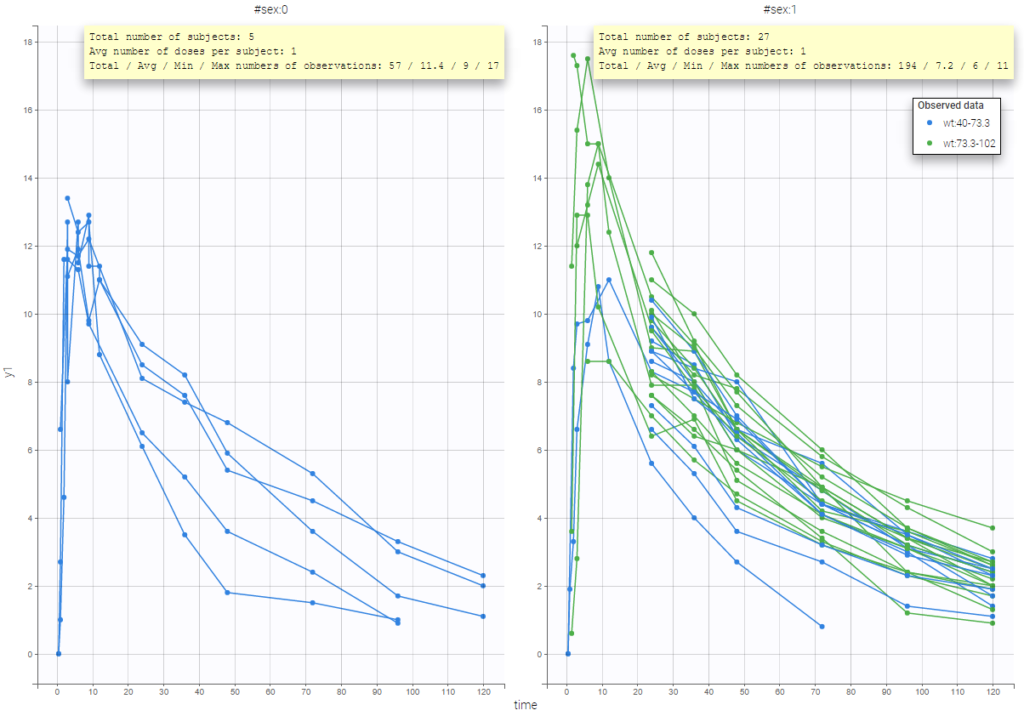 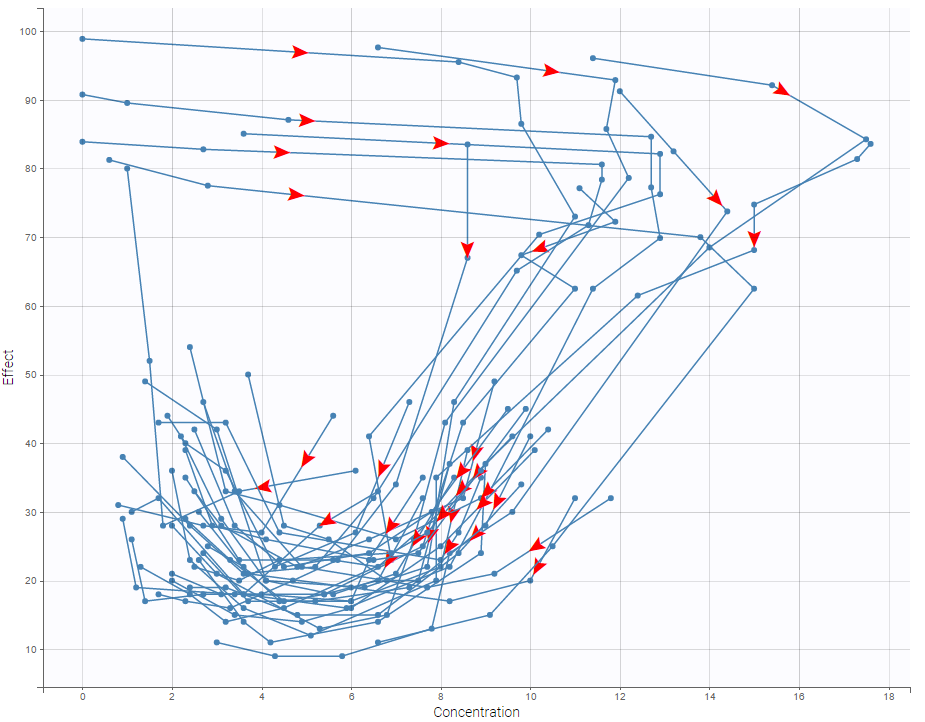 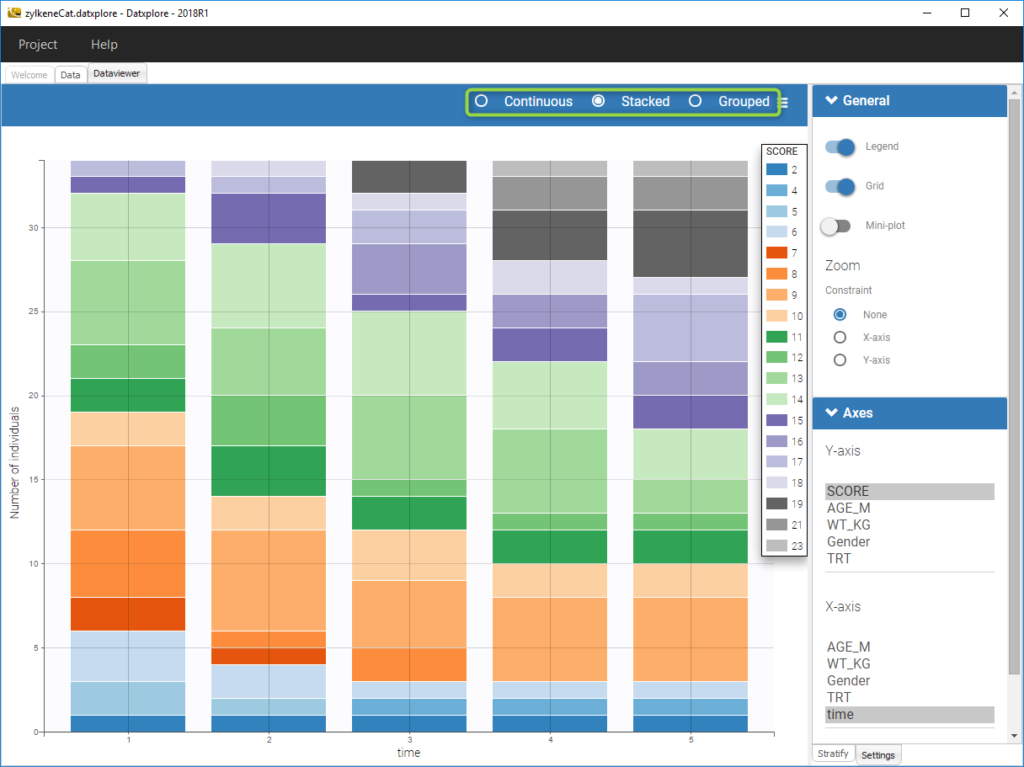 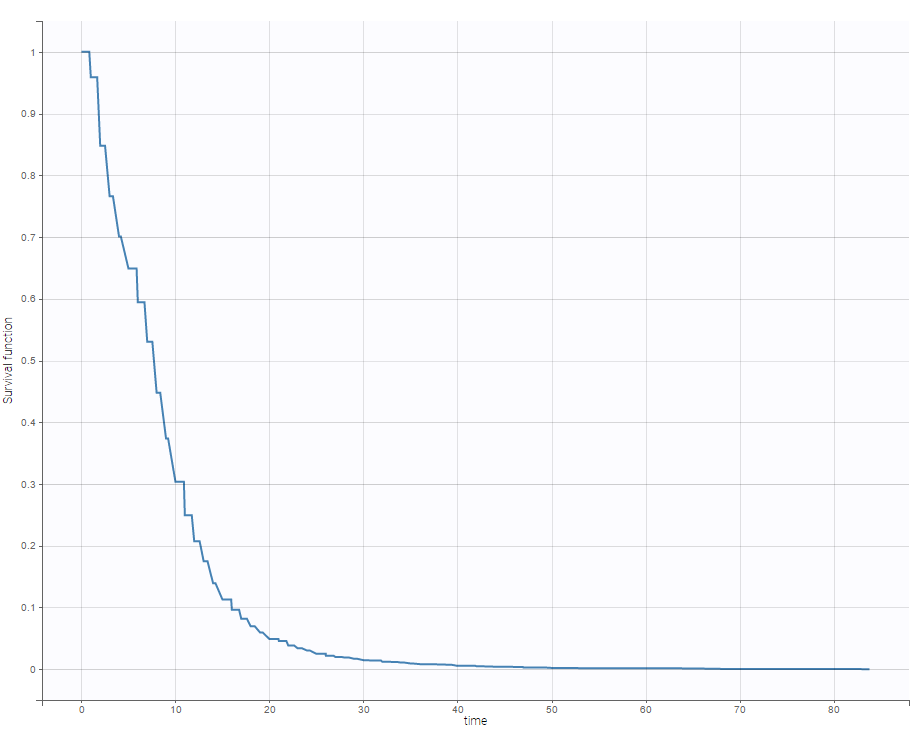 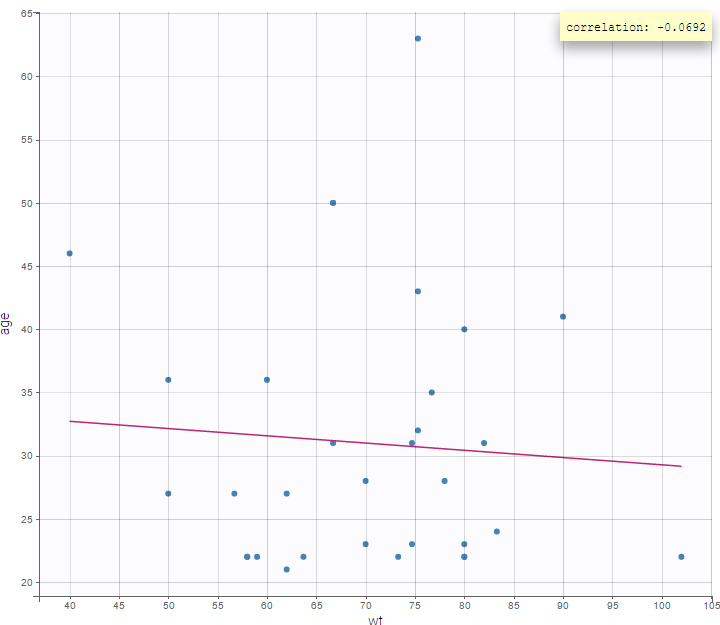 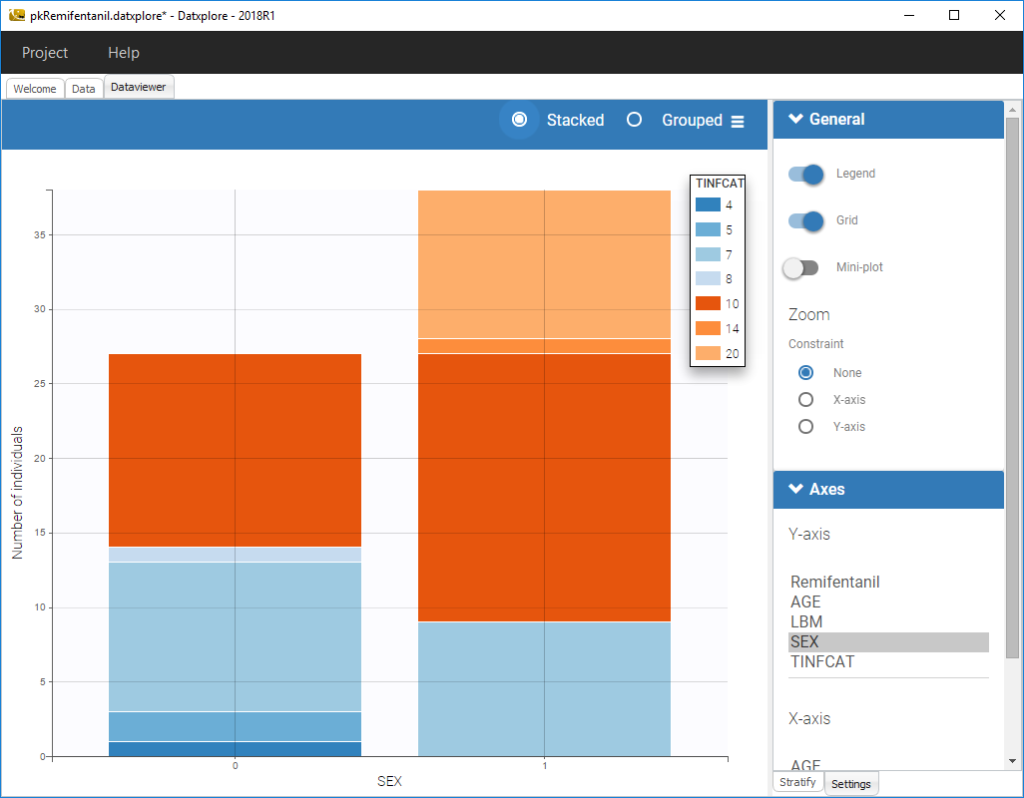 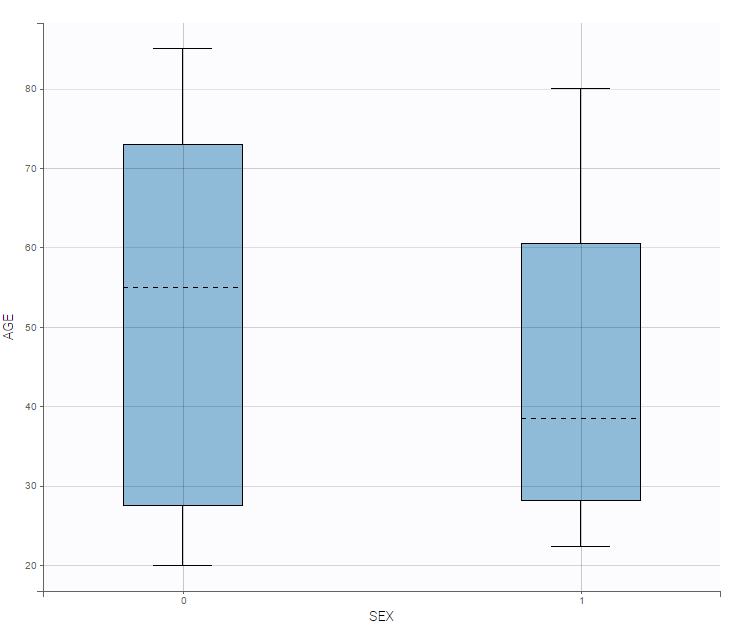 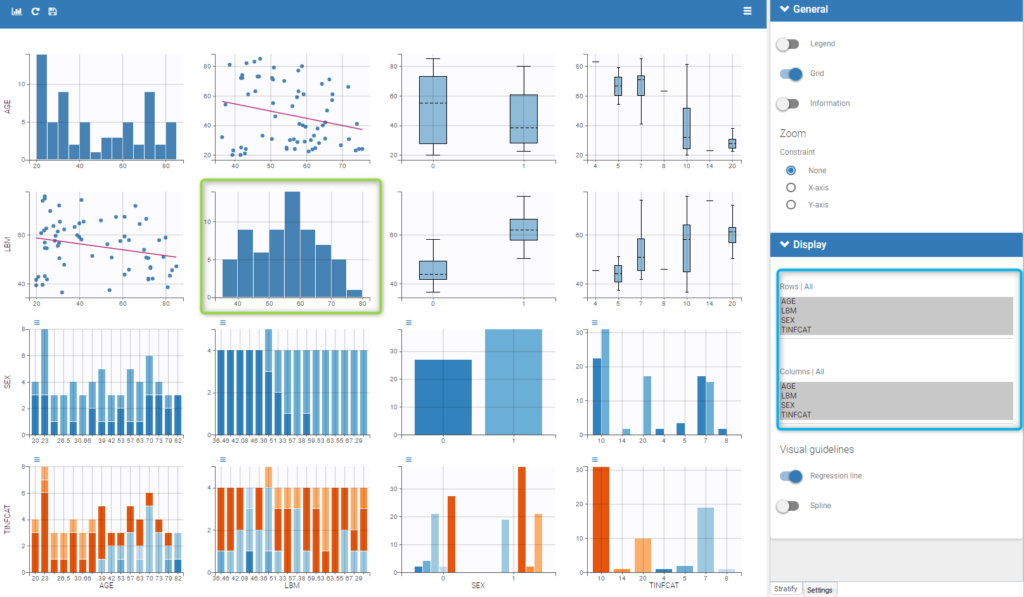 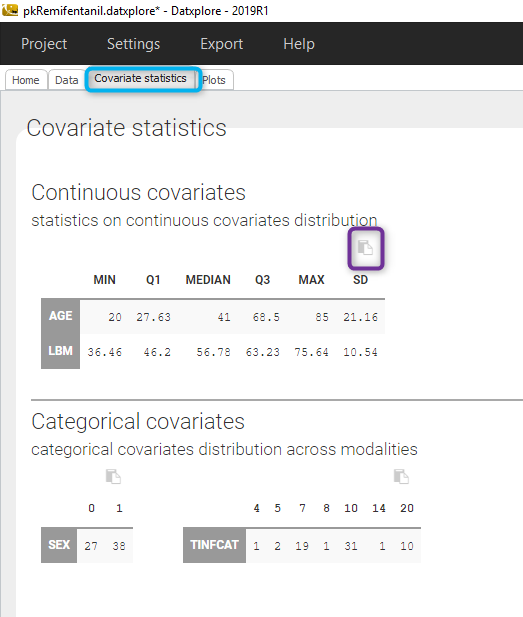